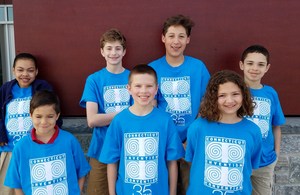 Six C.H. Barrows STEM Academy students are headed to Dearborn, Michigan later this month for the 2018 National Invention Convention and Entrepreneurship Expo (NICEE.)  North Windham Elementary School and C.H. Barrows combined sent 48 students from Windham Public Schools who progressed through the regional level to compete at the state Invention Convention at the University of Connecticut on Saturday, April 28. Selections were made there for students to progress to the national competition.  The six students represent a variety of grades, and their inventions solve a variety of problems:

Nathan Colletti, Grade 3 from Lisbon. He invented the The Go Anywhere Cup holder, a cup holder that is adjustable, moveable and can be put onto multiple surfaces like a table or hung on any type of glass.
Alexis Barber, Grade 3 from Moosup. She invented a Defrost Detector which helps you know if the food in your freezer defrosted and refroze due to a power outage.
Jaelyn Middleton, Grade 5 of Windham. He invented Party Pop, a tool that makes it easier to find a place to hit a piñata without having to hang it.
Darien Jenkins, Grade 5 of Windham. He invented a Kernel Katcher, a device that gets rid of any un-popped popcorn kernels, leaving only edible popcorn behind to eat.
Toby Keldsen, Grade 7 of Columbia. He invented The Forget Me Not which is a device to remind parents that their baby is in the car and sounds an alarm if they forget them. It can also be used to track children in public places.
Patrick Brennan, Grade 8 of South Windham. He invented the Backyard Puck Blaster, a moveable surface against which you can hit a puck or ball while practicing passing and shooting, and avoid hitting your house.

Superintendent of Windham Public Schools Dr. Patricia Garcia says, “We are pleased to see our students being successful in such an important initiative.  Students are using their knowledge and skills to open their minds about the world that surrounds them, and developing their appreciation for innovation.”

Last year two students from C.H. Barrows STEM Academy were among the 40 representing Connecticut at the national competition held in Washington, D.C.

Nicole Bay, the STEM Coach at Barrows says, “Experiences like these inspire students’ creativity and hard work to engineer solutions to local and global problems, helping them to take the next step toward realizing their dreams of pursuing a STEM career.”

“We are so proud of these students and their clever inventions,” says Barrows Principal Keith Cox.  “We are also pleased that the Invention Convention here has elevated creative thinking, and our students are rewarded       for their hard work with an opportunity to travel across the country to compete at the national level.  I would also like to recognize our staff members who encourage these students to think outside the box every day in their school work,” he adds.

The students will be recognized at the upcoming Board of Education meeting on May 9 at Windham High School media center at 7:00PM.

The 2018 National Invention Convention and Entrepreneurship Expo (NICEE) is presented this year by United Technologies Corporation from May 31 – June 2, 2018.  It will be hosted at The Henry Ford Museum in Dearborn, Michigan.